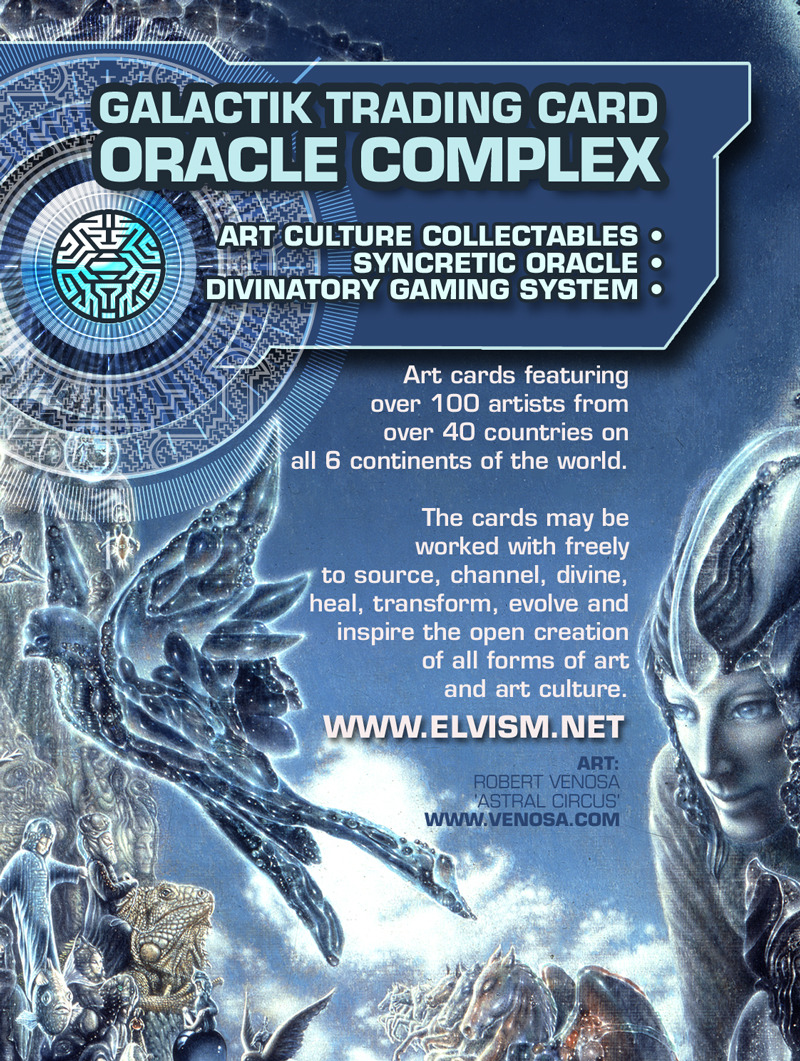 In an earlier post about Jose Argüelles’ prophetic calendar game Telektonon, I mentioned a crew of British Columbians I knowan elvish tribe of galactivators and technomystics who reside, appropriately enough, in the vicinity of Mt. Elphinstone, a modest peak along Canada’s kindly Sunshine Coast. I have encounter many glowing (and spectral) lights among this loose networkwhich is really just one node in a widespread, largely West Coast field of post-rave culture creatorsand they have often inspired me with visions of a fresh underground, organic and wired and transformative.

One of these culture creators is Delvin Solkinson, an enthusiastic former jock influenced, in roughly equal parts, by permaculture, Elfquest, plant medicines, Taoist poetry, and D&D. Delvin is a fine cook and a dedicated crafter of scenes and rituals, and one of his greatest concoctions is, to give it its full name, the Galactic Trading Card Oracle Complex Entheo Art Microgallery. This visionary artifact combines elements of the Tarot, the Dreamspell, and a trading card art catalog, creating a gorgeous and deeply millennial chunk of meta-programming soultech.

The Oracle Complex, which has seen various editions, permutations, and booster packs come and go, is now available in a more or less complete package. Despite the high quality of conception and design, it is still a very DIY affair (the package the deck comes in, for example, is a bit shoddy), but the quality of handcraft adds something as well.

The graphic design for the deck and the website was carried out by Delvin’s friend and partner Sijay James, another resident of the Elphinstone. A more technophilic yang to Delvin’s plantmind yinor, to borrow from the name of one of their earlier projects, a crystal to his sporeSijay crafts images that feel like interfaces to the multiverse, or blueprints for a cyborganic future that might actually come to pass. Sijay also had a major hand in the design of techgnosis.com, which he created with an extraterrestrial web prodigy named Phong, another Sunshine Coast resident who is spearheading a high-profile animation project that’s just about to bear some intoxicating fruit.

Delvin and Sijay know a lot of visionary artists, and on one level, the Oracle Complex is a way to give them some props. On the front of each laminated card is a full-bleed image, offering a little slice of entheogenic space. Some of the contributors are older and well-established visionary artists like Alex Grey, Robert Venosa, Paul Laffoley, and Martina Hoffman; others, like Vibrata Chromodoris, Mars-1, and Luke Brown, are just on the verge of blowing up.

The visionary art community is also very self-consciously a community, and this comes through the gathering of all these artists, and the fact that rawer, younger creators just finding their voice are included as well. On their own, some of these images might seem crude and derivative of well-trodden psychedelic doodles. But gathered together into a laminated microgallery, and they offer another reminder of how a shared field of imagination can help invoke communityfor in these postmodern days, community, and especially tribal community, is always in some sense an imagined one.

The back of the cards is where Delvin and Sijay’s elfspell kicks in. Like the Tarot, Oracle cards have their own elemental suits (Crystals, Glyphs, Keys, Orbs), plus a major arcana of Portals. The numerology of the cards draws from Tarot and Arguelles’ Dreamspell; I Ching trigrams, chakras, Platonic solids, and Mayan numbers are also involved. There are poems, shout-outs, and what Delvin calls the lightship, or name of the card. But rather than come off as some murky New Age soup, the design, words and organization of the Oracle complex suggest a map, or rather a meta-map. Not a specific worldviewTaoist or PLUR or Jedibut an interdimensional cartography, a cosmic permaculture.

There is something alien or estranged about the Oracle complex, like Vulcan chess or the objets d’art in David Lynch’s Dune. As with Argüelles’ Dreamspell, you get a sense of mathemagical density, of some prophetic arcana at worksomething only Taoist mountain sages and Pleiadian neuropathworkers would understand. But Delvin’s deck is an open system, without edges or totalities. Use it however you may use itfor altar icons, or random gifting, or divination. It does not lock you in. That might not make it the greatest oracle or the greatest game. But it makes a most enchanted artifact, because it suggests connection and possibility without endpregnant glyphs, wandering codes.