Erik Davis
Psychedelics
• 18 years ago
publish
Check it out

A review of Trialogues at the Edge of the West 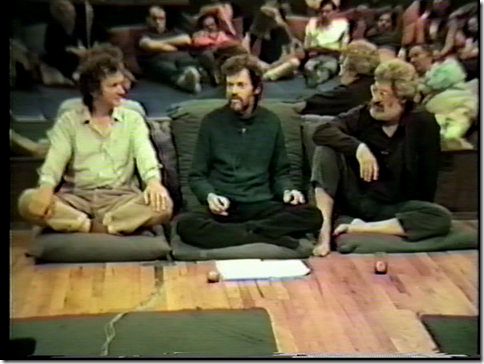 The best pop science resonates with popular desire. For Zen hippies pouring through The Tao of Physics and The Dancing Wu Li Masters in the ’70s, the paradoxes and chimeras of the quantum world not only explained their acid meltdowns, but uncovered a yawning void in the heart of Western scientific materialism. When scientist and Gaia Hypothesis author James Lovelock slapped the name of the Greek earth goddess onto his theory that the planet regulates itself as if it were a single organism, he had little idea that he was providing a powerful organizing myth to crunch, Neopagan environmentalists. As Errol Morris’ latest documentary suggests, millions bought Stephen Hawking’s difficult A Brief History of Time less for the man’s mind than for his bodyfolks sensed that if anyone can tap into cosmic wisdom, it’s this withered, technology-cradled Yoda who cheats death and communicates through a computer. And James Gleick’s best-selling 1987 pop science masterpiece, Chaos, ruled not only because it screamed “new paradigm” from every page, but because with its revelations about turbulence, complexity, and the order hidden with disorder, chaos seemed to grip the everyday world (the weather, cigarette smoke, your mind) and illuminate it with new and swirling light.

Never mind the contents of Chaosthe title alone sounded a death knell or an invocation, and the cover image of a neo-green digital worm sliming along a planet of fiery spirals seemed downloaded from technology’s astral plane. Inside, Gleick described how using computers to explore nonlinear dynamic systems led scientist to discover a secret garden between math and matter. Seemingly random behavior, when plotted in special ways, revealed a world of fractals (patterns repeated endlessly across infinite scales), strange attractors (complex but ordered patterns of behavior), and bifurcations (sensitive points where new attractors emerged unpredictably). Chaos theory sketched a magical map that seemed to conjure the spaces it described, and eerily similar patterns popped up in systems as diverse as dripping faucets and clouds and coastlines.

In recent years, chaos has migrated from mathematics, physics, and computer science departments to fields as far off as anthropology and economics, displaying a viral panache similar to poststructuralism’s as it spread through the humanities. And perhaps it’s no mere coincidence. In “Non-Organic Life,” an article in Zone Incorporations, Manuel DeLanda persuasively links the chaotic process of self-organization with Deleuzian poststructuralism, suggesting a more-than-metaphoric link between natural and social formations and sketching out a potent ethics of flow. Even literary theory is now surfing the fractal edge.

But chaos was not content with infecting theory, and leapt into the turbulent sea of pop culture. Fractals popped up on T-shirts, calendars, bumper stickers, and 12-inch techno remixes, and became sigils of the emerging technopagan culture of house DJs, brain machine mavens, and various Mondo 2000 critters. With chaos graphics resembling nothing so much as drip-castle snapshots of psychedelic flux, hoary tripster wisdom seemed hip again. Anarchist clowns,Illuminatus! fans, and SubGenius worshipers recognized the latest manifestation of Eris, the Greek chaos goddess who appeared to Malaclypse the Younger and Omar Khayyam Ravenhurst in a California bowling alley in 1957 (or ’58) and inspired them to found the Discordian Society (whose loony-tunes, countercult holy book, Principia Discordia: or How I Found Goddess and What I Did to Her When I Found Her, has been reissued by IllumiNet Press). Even manuals of “chaos magick” began popping up in occult book shops.

When scientific models are transformed in major metaphors (think Gaia, quantum leaps, DNA, black holes), they open up all sorts of latent cultural drives, including spiritual and metaphysical desires kept under wraps by the very scientific authority that produced the models in the first place. Pop science has long been source material for the delirious rush of wild speculation, and chaos is our latest and greatest fuel. Its fiery report is nowhere better manifested than in Trialogues at the Edge of the West, a breathless transcribed conversation among the fringe thinkers Ralph Abraham, Terence McKenna, and Rupert Sheldrake. Submitting hard pop science to imaginative spiritual anarchy, the three mena leading chaos mathematician, a brilliant and seductive bard of the resurgent psychedelic tribe, and an ex-Cambridge biochemist who originated the heretical theory of “morphogenetic fields”hurl toward conclusions about the cosmos and mind which, if they were ever reached, would probably wind the trio up in padded cells. While nonlinear dynamics is only one of Trialogue’s many themes, the book’s turbulent buzz is chaos incarnate.

As Jean Houston writes in her foreword, the three dudes are apologists for an emergent “omniculture” of free-fall radical syncretism, and their eclectic orgy of theories, counterhistories, and gods is about as multiculti as Green, Goddess-loving white men can get. Like James Hillman and Michael Ventura’s dialogue in We’ve Had a Hundred Years of Psychotherapy and the World’s Getting Worse, the Trialogues trio uses the conversational form to forego conclusions and draw the reader into an open field. But make no mistakethe bottom line here is shit-shooting. Plato, bang. Chreodes, bang. Calendrical reform, hermeticism, sacred tourism, Newton, Goethe, bang, bang, bang, bang. It’s impossible to locate the eye of this cyclone, but the most provocative and coherent exchanges take place in the first half of the book, where Abraham takes the position of chaos, Sheldrake that of creative evolution, and McKenna, the human and shroomin’ mind. They call to life a cosmos without laws, only habits; a world where consciousness is not a detached observer but a co-creator bedded in the “Gaian mind”; and a human destiny poised between the chthonic upswell of chaos and the crystalline dimensions of the UFO. They tip their hats to various gnostics, scientists, and process philosophers like Bergson and Whiteheadthough with McKenna’s descriptions of shamanic metallurgy, “reverse Platonism,” and the molecular unconsciousness opened up by “antiterritoriality drugs,” he uncannily resembles a scruffy, West Coast Gilles Deleuze.

Though the conversations transcribed in Trialogues took place at Esalen, these guys aren’t half as New Age as, say, your average weekend-management-seminar guru. All three are intellectuals who cut themselves imaginative slack, each with beefier books than Trialogues to their name. Sheldrake’s A New Science of Life, a righteous work of quasi-science, suggests that nature’s creations are guided by habitual mnemonic grooves located in morphogenetic fields without mass or energy, giving rise to a sort of hundredth-monkey effect as new forms ripple through the species as a whole. Besides technical papers, Abraham has put out the visually informative and equation-free Dynamics: The Geometry of Behavior, which brings chaos math to the motivated fool. McKenna states his wild claims about mushrooms and apes and the end of history in two recent books, Food of the Gods and The Archaic Revival, though his most rigorous stab and the connection between chemicals, the brain, and the “machine elves of hyperspace” is made in The Invisible Landscape, a ’70s gem written with his brother, Dennis, following their successful attempt to turn their minds into hyperdimensional Silly Putty in the heart of the Amazon.

These slightly cracked eggheads are drawn to the tantalizing patterns that seem to hover around matter without being strictly identified with itmorphogenetic field organize nature from some implicate realm, much of chaos reveals itself in the virtual space of computer modeling, and psychedelics sees worlds in grains of sand. All three men also tend toward strange and beautiful teleologies, the most severe of which is McKenna’s apocalyptic sense that the cultural compression and intense novelty of human historynot to mention today’s “techno-biological-informational soup”are the backwards shock wave of some world-rending transcendent Weird lurking just over the horizon. Though from a mundane perspective McKenna is himself only a few steps away from a sandwich board (he’s already dated the end of time as December 21, 2012), he makes the point to his critical colleagues that keeping the spine-tingling grok of end-times in mind is not such a bad strategy when the forces that threaten the planet maintain an attitude of business-as-usual.

For all their strange theories, the Trialogues trio are not crackpotsthey know too much intellectual history to fall into the trap of literalism or fanaticism, and all three are sensitive to the role that linguistic warp plays in the manipulation of scientific ideas. After Sheldrake and McKenna milk the image of the chaotic “attractor” for cosmic meaning, Abraham responds with an understated “I can’t say it’s wrong, but I’m sure it’s different form the way any mathematician has thought about attractors.” This leads them to discuss Voltaire’s contention that Newton’s gravitational theory would have caught on 30 years sooner in France is Newton hadn’t used the word “attraction,” with its animist flavor. Most scientists resent the way culture feeds off the flesh of the metaphors and images that mask scientific truths in the world (and, though they don’t like to acknowledge it, within science itself). Of course, our heroes leap on this intuitive residue. In fact Abrahamby Scientific American standards, the only legitimate one of the bunchpushes these creative analogies the farthest. Recognizing that “chaos science” could just as easily have insisted on “nonlinear dynamic systems theory” as its name, Abraham nonetheless joyously resurrects ancient chaos deities like the Babylonian goddess Tiamat in order to mythologically overturn the sky-gods of patriarchy and law. Hail Eris!

Like any late-night wind-and-cannabis conversation, Trialogues sometimes degenerates into the babbling of loons. Particularly ripe is the discussion of the parapsychological basis of the “evil eye” or, even better, the possibility of downloading human consciousness into intergalactic mushroom spores. For fans of the fringe, these zingers are like guitar solos that go awry but retain a fucked-up verve. For others, such notions may be the last straw. Cynics and folks whose politics are more concrete than leafy will no doubt whiff the pathetic odor of hopeless idealism lurking around the authors’ visions of Neopagan Green jihads and free-associating, Esalen-like educational reforms. Still, in a world grasping ever more desperately for a clue, wild speculation is not only a great pleasure (and an inalienable cognitive right), but an engagement with the chaos that’s afoot. Everywhere, boundaries dissolve into an interdisciplinary, multinational, multicultural, cyber-spatial stew; everywhere, hyphens and slashes and samples and syncretic couplings in margins are increasingly indistinguishable from the mainstream. The gentlemen in Trialogues give us permission to clutch after grand patterns as we slide down the chute, to grapple with the increasingly pervasive intuition that, for better or worse, something mutant this way comes.