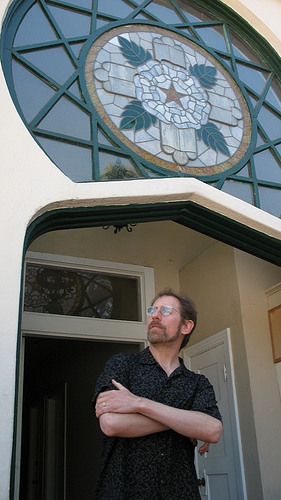 Ever since I put together The Visionary State, my book about sacred sites and histories in California, I have had a yen to lead a crew of folks to some of my favorite places and to introduce themto the joys of spiritual tourism, California-style. When I found out that Kim Cooper–a 33 1/3 book author whom I met through a secret society–also ran an alternative bus tour business called Esotouric in LA, the experiment became inevitable. Usually Kim and her husband Richard focus on true crime and hard-boiled writers, but my fascination with alternative religion in LA piqued their interest, and so on June 7, just a few days ago, we were off.

The tour went off perfectly. We managed to fill up the bus, and all the visits went off without a hitch, and it began with some thrills. To get to the Krotona Inn, part of a former Theosophical colony and now an apartment building, Jeff the driver managed to guide the large tour bus up a windy road in the Hollywood hills…in reverse. A few lingering signs of the community–a domed “Esoteric Room,” some stained glass Rosicrucian-style–makes Krotona the perfect example of how spiritual groups have left their trace on LA long after the groups themselves have moved on. These buildings teach a good lesson in spiritual tourism: you need an eye of spirit to catch the clues.

The next stop was the Monastery of the Angels, where 22 Dominican nuns lead the cloistered life. In a small chapel with some delightful Art Nouveau-styled designs, they sing the liturgy of the hours from behind a screen. This Saturday there was some holy Mary statue in town making the rounds, and so the service become an awkward and unintentional piece of performance art. The singing was cut short as a number of underlings fiddled with an uncooperative light stand as they set up the charmed Fatima statue. For anyone who bought the pumpkin bread, however, the stop was more than worthwhile.

Our visit to the Aetherius Society, one of the most long-lived UFO churches in the world, was the one I was most looking forward to and the one I was proudest to have been able to arrange (along with the Esotouric crew of course). Their temple room is immaculate and charming, and Paul Nugent gave a very cogent and appealing introduction to the group’s unusual beliefs and the life of their founder, George King. Nugent also showed a video set to a recording of one of King’s channeled messages from the extraterrestrial master Jesus Christ. Images from the Hubble accompanied the blessing, and so moved my dad–a no-bullshit scientist–that he ended up expressing great enthusiasm for the visit. Given that one of my supreme anxieties before the tour was the vision of my father chortling during Nugent’s talk, blessings were clearly in effect. Lunch on the Aetherius lawn was casual and kind. Good (and strange) folk definitely heard the call of this tour.

Afterwards we threaded our way near the Hollywood freeway for a stop at the Vedanta Society, where Christopher Isherwood, Aldous Huxley, and the mysterious Gerald Heard studied back in the day and helped seed much of California’s postwar New Age boom. In the calm, rather spare temple room, we heard a great talk from Swami Atmavidyananda, who gave a nuanced account of Hindu devotional practice, although Vedanta itself is known more as an intellectual path. The Swami talked about how the God which is in us all took on different deity forms in order to allow practitioners to find the most appealing and easiest route towards the divine. He used the example of Hollywood stars who we love but especially in certain roles, one of which might wind up as a poster on our wall–a fit analogy given the center’s location, and its one-time appeal to stars like Tyrone Power and Greta Garbo. (Prabhavananda, the center’s first onsite Swami, also liked to take the monks to the movies during he tenure.)

We rounded off the afternoon with a visit to the Philisophical Research Society, an institute founded by Manly P. Hall, probably the single most influential figure in the booming esoteric scene of Los Angeles in the twentieth century. Here I handed over the ropes to Maja D’Aoust, the librarian of the PRS and a frequent (and excellent) speaker there. Despite numerous attempts, I had never visited the library before, and was blown away with its collection, its decor, its architecture, and what can only be called its vibe. (I didn’t mind seeing a copy of The Visionary State in the comparative religion section either.)  Toward the end, Maja turned to a device that looked like a prop from a 1930s Flash Gordon movie and showed a few of the glass slides collected by Hall, a tireless hoarder of esoteric images as well as books. (You can see this gizmo along with Maja’s sassy hairstyle in the flickr link above.) For me, this visit was the tour highlight, partly because I could sink back into the crowd, and partly because Maja helped clarify for me how much of Hall’s spirituality really came, at root, from a passion for research.

Of course, the real prize on Saturday was that the whole tour went off so well, and that a good time was had by all–and will hopefully be had again sometime this fall. The next morning I organized an informal gathering at Clifton’s in downtown LA, an amazing cafeteria whose main eating area has an over-the-top California redwood theme complete with babbling brooks, faux pine trees, and a little chapel where you can hear a prayerful hymn to nature. Thirty or so fans of esoterica gathered, including Isis and Electricity from the Source family, and Louis Sahagun, the author of Master of the Mysteries, a new book on Manly P. Hall that faithful readers of this site will be hearing about as soon as I get my hands on a comp copy. The conversation was great, and so, somewhat surprisingly, were the chilaquiles. The event, and the crowd it drew, made me even more confident that my next event in LA, the film-lecture event on “Occult LA” that I am leading next Sunday the 15th at the Silent Movie Theatre, will go swimmingly. (More info can be found on my website or at http://www.silentmovietheatre.com/.) Maybe some spirits will even show up.