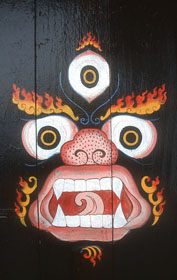 Until recently, John Giorno cut only the vaguest of profiles in my countercultural imagination. I knew he was an old school bohemian Buddhist guy who lived in lower Manhattan, occupying a loft above the famous bunker once inhabited by William Burroughs. I knew Giorno had something to do with poetry and music and performance, but that was mostly based on the John Giorno Poetry System record I bought long ago with Laurie Anderson and Burroughs on it. Long ago I attended a public event at Giorno’s loft, where I sat on a cushion for hours and watched a Tibetan high-hat propitiate the demons in an elaborate chöd ceremony that closed with a feast. Beyond that, I had little sense of Giorno, and figured that his poetry, which I had never stumbled across, was a sort of bowery basement take on the usual hippy-Beat mix of sex, drugs, and dharma.

After scarfing up Subduing Demons in America, Giorno’s terrific new career-spanning collection, I discovered that in some ways I was right: sex, drugs and dharma are the main dishes on the table, along with violence,  despair, and supernovas. But the meal itself proved to be as profound, unnerving, and hypnotic as the ritual repast that the chöd lamas offer to the hungry ghosts. The poems begin in the early 1960s when, as Marcus Boon explains in his limpid and illuminating introduction, the young Long Island boy met, befriended, and in some cases made love with artists like Robert Rauschenberg, Jasper Johns, and Andy Warhol. Giorno decided to apply their Pop appropriation strategies to poetry. The result are a series of striking found poems, at once quotidian and luminescent, whose words are lifted from newspapers, recipe books, and porn. These poems both embody and dissolve their era, and they have an impersonality and formal playfulness that allies Giorno more with his artist pals than with the vast pack of confessional and expressionistic post-Beat underground poets—most of whom are, to my ear, far more interesting as a cultural phenomena than they are good. Giorno is very interesting, and he is very very good.

In 1967, Giorno started presenting his poems as part of larger “multisensory” events that featured Moogs and light shows and his own increasingly physical performance. These rousing shingdigs were influential, even prophetic, but as Boon points out, all of the poems began life as words on a page and are perfectly at home there as well. While flowing smoothly from vernacular speech, Giorno’s late 60s poems are also deeply psychedelic, but not in a trippy dippy way. Rather, it is a psychedelia rooted in perceptual and linguistic distortion of ordinary, sometimes grim reality—visionary appropriation, you could call it. Giorno’s most unusual formal device is to present his sample-saturated verse in two mirrored columns whose lines sutter and repeat and whose mutual reflections echo and interpenetrate one another. From “Cunt”:

As you eyes flutter across the two columns, which more or less present the same, often mildly repetitive poetic material, you invariably get a bit giddy, until the flow of sense itself begins to stutter and resonate. Rather than attempting an arch experimental move of evacuating meaning, Giorno’s use of repetition is deeply musical, and sometimes draws from the conventions of popular song. (It is no wonder he influenced the punk scene, and later fronted a downtown band.) But the interlaced echoes that characterize so many of Giorno’s poems also emerge from the nature of his appropriation practice. As both Warhol and New York’s early hip-hop DJs discovered, once you start sampling, then you almost inevitably begin multiplying samples and playing with the mimetic and rhythmic patterns of repetition.

In the early ’70s, Giorno’s poetry grows increasingly intense and visionary. The poet was part of the American vanguard that first embraced Tibetan Buddhism, and Giorno met and practiced with spiritual heavy-weights like Chögyam Trungpa and Dudjom Rinpoche. Though Giorno does not consider himself a Buddhist poet—and sharing little of the playful and often vapid goofiness of Ginsberg’s most self-conscious dharma verse—his Buddhist practice informs his poetic relationship to suffering and to the ontology of the image. From his earliest verse, Giorno cast a dispassionate if fascinated eye on violence and despair, and the invocation of tantric deities and Vajrayana invocations of radiant emptiness are grounded in the hard groundlessness of napalm and suicide and the dark side of 70s gay bohemia.

“Suicide Sutra,” from 1974, moved me greatly: a claustrophobic, Lower East Side chöd manual of bardo terror that’s easy to read and impossible to shake.

In the late 70s, Giorno’s poems grow increasingly personal and include gritty reports from New York’s broken-hearted gay underground. To my ears these pieces lose something in focusing more on his personal “I,” and become occasionally self-indulgent. Perhaps Giorno’s growth into a more personal poetics was a necessary part of his own path, but the poetry that results lacks the objective if hallucinatory realism of his earlier, more sampledelic work. Despite sticking with the Buddhist line over the decades, Giorno seems to have grown more comfortable with the “I” whose exlusive claim he practices to dissolve. It is his ability to inhabit both voices—the self and the no-self—that gives the best poems in the latter third of the book an air of wisdom that is both light and heavy, like the rainbow display in a slimy pool of oil you inevitably splash in as you hustle home late at night alone.

“The Alchemy of Trash”

“The Paisley Gate: the Tantra of Psychedelics”