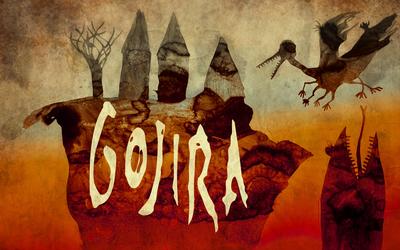 “French rock” is as about as disturbing a category of cultural goods as “English food.” That said, one of the most powerful metal acts I’ve heard in a while is an act founded in the seaside town of Bayonne over a decade ago by the Duplantier brothers, Joe (vocals, gtr) and Mario, a phenomenal drummer who plays like a jazzbo born in a Uruk-hai’s body. The Way of All Flesh is only their fourth record, and it is darker and more awesome than the excellent From Mars to Sirius album that preceded it.

Without sounding self-consciously “experimental,” Gojira’s style eludes the net of micro-genre, with elements of technical death metal, metalcore (especially in the vocals), thrash, ambient soundscapes, and prog. Though laced with nerdy guitar doodles and the occasional epic sorta-chorus, the songs are essentially rhythmic: chunky and frequently brutal grooves that are often criss-crossed with kinetic polyrhythms that, despite the Mac Truck momentum, actually manage to swing.

The paradox is that this dark, intense, and sophisticated-without-being-wanky metal is laced with spiritual lyrics that border the New Age. “You have the power to heal yourself,” Joe proclaims in “Esoteric Surgery,” while other songs intelligently reference kundalini (“crawling stately along the spine”), the bardo state, and the “circle life of all creation.” What gives?

Thematically, The Way of All Flesh looks squarely in the face of our own demise, as individuals and, potentially, as a race dependent on a planet we seem bent on destroying. Gojira’s Death is not the spooky, blade-wielding dude of D&D metal, nor the almost equally cartoonish pro-death nihilism of some more infernal handbangers. Instead, their Death is reality—your personal mortality, and the destruction of “the living creatures on our side.” (This just in! A quarter to a third of all mammal species are now on the endangered block.) By confronting this stuff with open eyes, Gojira earn the air of heaviness that all metal strives for—a grim gaze that, like some Jungian mosh-pit enantiodromia, flowers into an oddly redemptive space of healing and re-entrance into the circle of life.

Our dying planet is still the band’s central bummer, with their kundalini hymn “Orobouros” followed by “Toxic Garbage Island,” an intentionally stuttered and stumbling invocation of that Texas-sized vortex of trash twirling in the Pacific. Faced with such an unbelievable monstrosity, Gojira do not take the more activist thrash stance and rail against a fucked up world. Instead, they turn within and wonder who or what we are that we could be responsible for this, as for so many other horrors.

In “A Sight to Behold,” which begins with an almost dorky syth-pop melody,  Joe’s vocoder-twisted voice interrogates this self, even as the music subtly mocks our buzzing, bleeping network of techno-gadget distraction. “We all behave like children, taking off the head of our teddy bear / to see what’s inside, taking, not giving back.” The double kick drums enter, and the song grows as heavy as our future, and once again, Joe looks within:

A lot of us have visited this place, the traumatic, antihumanist core of environmental awareness: the moment you realize that your own personality, its tastes and struggles, is almost entirely a part of the problem. Alienation and withdrawal are inevitable strategies, the conviction that “I have to stay away from me.” You certainly can’t think your way out of the trap. You know there are plenty of rational explanations about why we are so fucked up, but you can’t get it and don’t want to and are so disgusted you don’t even want to try anymore.

That said, Gojira are wise enough to realize that the fear and anger stirred up by the environmental crisis is often fueled by our own fear of death and decay, a confrontation that for all of us has already begun, however many years we are from the deathbed and however we disguise how evanescent those years are. Much of the rest of the album engages various facets of Thanatos, with a grueling stick-with-it-ness that feels sometimes like the Tibetan’s bardo ride (“The Art of Dying,” “Yama’s Messengers”) and sometimes like ayahuasca’s karmic Drano (“Vacuity,” “Esoteric Surgery,” with its image of black insects sucked out of the spirit body).

Given the intensity of these songs, Joe’s turn towards saving images of spiritual regeneration seem earned rather than platitudinous. They echo the old lore that only by dying while still alive can we truly live in this wonderful place, even if truly living here now means witnessing the demise of many of those wonders with open eyes. This alchemical about-face may explain Joe’s curious admonishment in the title track that we should “increase your fall on purpose.” Perhaps only by bottoming out do you wake up and realize “You were the only one that was tearing your soul apart.” Let’s hope such phoenixes may rise on a planetary scale as well.