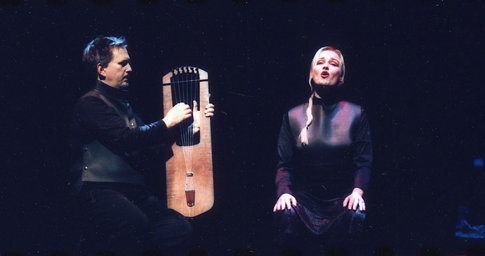 Perhaps the most powerfully enchanted literary source for old-school European paganism is a 13th century Icelandic manuscript called the Codex Regius, which contains a group of poems known as the The Poetic Edda

. The Icelanders were tucked away in the attic of the world, and though they converted to Christianity around 1000—voluntarily, and for largely diplomatic reasons—the old ways held on, albeit transformed, and made an unusually direct impression, here and elsewhere, on the island’s literary corpus. Of course, a great icy chasm lies between the no doubt feisty oral culture of Northern Germanic heathenism and a few Christian scholars scribbling away centuries later about the gods and dragon-slaying heroes of their distant ancestors. But in the case of Poetic Edda and certainly Snorri Sturluson’s related Prose Edda, these literary records were not driven by anti-heathen bigotry, but a seemingly fond or at least preservation-minded desire to capture some of the stories that had shaped Iceland’s folklore, place names, and traditional poetic forms.

And, presumably, music as well, or at least the musical performances that would have accompanied the bards and minstrels that kept these poems alive in an only sorta Christian land until those monks set to scribbling. No notations of such music survive, but the task of reconstructing what such performances might have sounded like was taken up a decade ago by the early music ensemble Sequentia. The group made their name, and presumably a good chunk of change, through some enormously successful recordings of the visionary abbess Hildegard von Bingen, every New Age lady’s favorite medieval Catholic. The results of their Eddic explorations appear on two discs, Edda

and The Rheingold Curse

, both of which came out years ago but I just discovered them and, though my inner music reviewer feels terribly guilty for not writing about the latest thing, isn’t that what the freedom of online self-publishing is really all about, to wander through the networks of human cultural production whatever way you choose?

Sequentia wander far. To capture the feel of an Icelandic medieval minstrel show, both discs draw from the same musical language, which involves short and mournful motives explored with lyre, open-tuned fiddle, and voice. The two women—Lena Susanne Norin on both discs, paired with Barbara Thornton on Edda and Agnethe Christensen on Rheingold—sing like the sibyls some of their songs are about, while Benjamin Bagby, the mastermind of the group, goes for a more bardic approach, barking and roaring and swooping. I won’t try to explain the musicological and historical logic that Sequentia applied to their material in order to generate it, only to say that they went pretty far—their archaic pronunciation of Icelandic was meticulously reconstructed by some Icelandic philologist—and that it sounds deep and spooky.

One of the things that makes early music particularly attractive to imaginative geeks, including myself, is that the need to reconstruct past music out of meagre source material sythesizes two human capacities that are often sundered in our age: nerdish skills, in this case for historically saturated fine-grained analysis, with what you might as well call Romance: the poetic, imaginative, and passionate fleshing out that must occur if the results are really going to resonate.

The downside of all this is that sometimes you gotta geek out a bit to enjoy the show. To wit: while I guess you could listen to these discs without reading the booklet’s translations of the poems at the same time, I don’t think it would work very well. Though haunting and often beautiful, the delivery of these words is too stark, even pungent—like pine sap in winter—to conjure up that neomedieval vibe of roast mutton and saucy maids. There are a few choice fiddle instrumentals, and a nifty swan-bone flute on the Rheingold recording, but these performances are, at root, about the words and the dark tales they tell.

Edda is a single disc that focuses on tales of the gods: Odin’s shamanic self-sacrifice, Baldr’s dream of his own demise, Þhor’s bid to win back his hammer, stolen by giants, by going in drag to their fell realm.  The Rheingold Curse is a more ambitious two-disc set that reconstructs—using a bit of non-Eddic material—the heroic Germanic tale that lies behind Wagner’s Ring cycle. I’d say the latter disc is a tad more satisfying, in that it tells a continuous tale, seems more balanced in its elements, and features the silvery colors of that swan-bone flute, which bursts into stunningly eerie song when it signifies the birdspeech that Sigurd can grok once he’s licked the dragon Fafnir’s blood. For Wagner fans, it may be the most appropriate introduction to the lore that also informs the Völsunga Saga and the Nibelungenlied, the other main sources for the myth of the Ring. On the other hand, the cost of the double-disc set, at least on these western shores, will make you appreciate the Viking logic of ruthless pillage.

Thousands of acts these days attempt to create an atmosphere of European paganism in their music, from black metal bands to gothic ambient artists to neomedieval folk groups. I won’t say Sequentia’s Eddic music is the “real deal,” because it is heavily reconstructed, albeit at a rigorously intellectual level. But its uncanny turns, its eldritch but strangely familiar modes, and, yes, even its mild tedium, all conspire to create a rare musical vessel of the heathen imagination. The various renderings of the Völuspá scattered across both discs are without doubt the best way to encounter that great spectral poem—an apocalyptic sybil song that ranks with the ancienct “Thunder, Perfect Mind,” not to mention that creepy Cate Blanchett scene in The Fellowship of the Ring, in terms of its sacred-femme uncanniness and psychedelic fear factor.

In the end, listening to Sequentia’s Eddic music is really more like listening to a radio play than an early music disc, but a radio play that, like the War of the Worlds or something, really sounds like something its not. Which is, when you think about it, a pretty nifty way to sip from one of the choice literary fonts of world mythology. For though we cannot know what the Eddic texts sounded like or meant when their contents were most fully alive, we do know that they were heard and not read.