Thor's hammer is made of metal 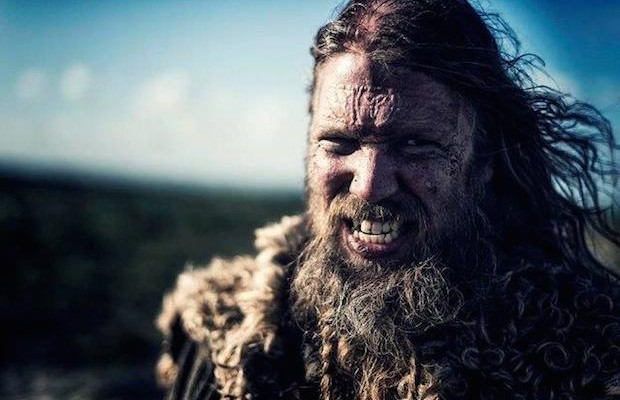 Anybody out there feeling a little endtimes lately? Crack in the sky above, tectonic shifts grinding below? That’s my vibe too, at least some of the time, which is why I have been spending a lot of time lately listening to apocalyptic metal albums, especially two recent discs by Amon Amarth and Gojira. It is a somewhat corny response I admit, given that the time would probably be better spent learning how to dig for grubs or build wicki-ups or fire weapons.

A Viking death metal band from Sweden might sound like pretty arcane stuff, but Amon Amarth are a Billboard-charting act that’s pretty successful in Europe, where metal bands can garner some serious cake. Despite trafficking in gruff sounds, the band has tremendous commercial aspirations—they are the kind of act that wears their own tour t-shirts onstage, and will prostitute their quirks in the quest for brand identification (the Thor pendants, the furrowed brows, the synchronized hair-twirling head-banging that resembles a Nordic car wash). Unlike more experimental or ugly metal, the music on their new Twilight of the Thunder God is pleasurable to the point of pop—rapid and chunky death metal riffs forged into epic, hummable melodies that are often layered with those strangely pleasing harmonic intervals first explored by Iron Maiden. Singing songs that are really slices of story, Johann Vegg does do the Cookie monster thing, but he enunciates like a bard.

Given their hunger for the marketplace, I keep expecting Amon Amarth to go mushy and goth as they climb the charts. I think upon the lamentable Opeth, once a supreme death metal act of vast power and now a groveler in the mire of lacy fromage noire. But though Twilight has a slicker sound and even more accessible chops than 2006’ With Oden on Our Side, which I slightly prefer, the band still sound like crusty heathen bladesmen who almost mean it. As always, the songs are all about Vikings, but this time the central theme is Ragnarök—the Nordic Armageddon that occurs as a series of natural disasters and supernatural battles trigger the ending of the age. The album’s first song accurately sets the stage: the great wolf Fenrir is on the prowl, while the world serpent Jormundgandr twists about the world tree, stirring up the seas. Thor—the patron saint of the band, who looks rather like Hegg on the cover—attacks the snake with his hammer Mjölner, causing him to roar in pain. The song’s chorus calls on the god to “Ride to meet your fate / Your destiny awaits.” Given the stirring chords and heroic bravura, you’d think this destiny would be triumph. But it’s not. Thor, along with almost all of his fellow gods, dies during Ragnarök.

I still remember the shock I felt when I first discovered this apocalyptic bummer. I was ten years old and living in Greece, where my step-father was born and where my family had moved for a year. I was at that age when the budding soul absorbs mythology like a sponge, and yet, rather than pore over the ambient Attic lore, I buried myself in books of the North. And so I read about the colossal battle at the end of time, when the sun and moon are swallowed in outer darkness and the Aesir gather to fight the forces of chaos, and then…lose. Odin, Thor, Freyr—they are toast. While another green world does eventually emerge, this grim eclipse remains one of the stranger cosmic turns in world mythology, and one of the most moving, because it captures in a single tale the sad tang that characterizes Northern lore, a fatalistic melancholy that comes down to us as the “passing of the ages” in The Lord of the Rings (bye bye Elflords!) and Wagner’s Götterdämmerung, that “Twilight of the Gods” that Amon Amarth is biting for their album title.

Metal is stereotypically bummer music, of course, and has long trafficked in all manner of apocalypses. (Satanic, ecological, militaristic, incoherent.) What moves me about Amon Amarth is how they turn Ragnarök’s “Custer’s last stand” thing into an ethos more complex than your typical metal nihilism. Their central image, restaged in a variety of ways through the battle-weary narratives that make up the bulk of these tunes, is the warrior facing a hopeless fight, wounded and fierce, beyond hope and fear, going down alone. In song after song, the band milk the pessimistic nobility of this grim twilit stance, and while we cannot say that the Sisyphuses in their songs are happy, they are resolved and even content, not selflessly “doing their duty” but affirming their selves in their loss. “I know who I am,” Hegg sings. “I am an evil man.”

Such stoic pride in the face of war’s horror is a treacherous brew, of course, for it still suggests a possible nobility to organized violence. Listening to Amon Amarth, I sometimes feel like I am trapped in a blistering hot armored vehicle in the Eastern sands, trying to keep my spirit alive of a situation fucked up beyond measure. But if you shift the metaphor beyond literal battle, or turn to face the sickle-wielding enemy who will best us all one of these days, then their last-ditch heroism gains depth. For such stoic resolve can equally be applied to the great turbulence of our age, and especially to the drastic planetary changes that lie on our horizon, just as they heralded Ragnarök. I am still sticking with Gramsci’s optimism of the will, and I actually see a lot of amazing possibilities emerging from the brink we’re on. But some days, some weeks, such succor is just not available. Sometimes I just cannot believe that technology or global political institutions or human transformation or local communities or shamanic wisdom or friggin aliens will somehow save the day. I feel the urge to turn off, to bury my head in media distraction or narcissistic depression or the fading soundtrack of “business as usual.” Sometimes that works, but often not. At such times, about the only stance I can feel my way into is the sort of ethical fatalism that Amon Amarth captures: doing what I do without hope or fear, realist but still shadowed by spirit, by the large metaphors of the gods. The fact that I find such meat in a cornball keg-ready heavy metal album with an enormous serpent on the cover and a string quartet in one of the songs provides an even deeper affirmation: to not take this fable too seriously, even unto the bitter end.

Only a Northern Song