The most cosmic American religion 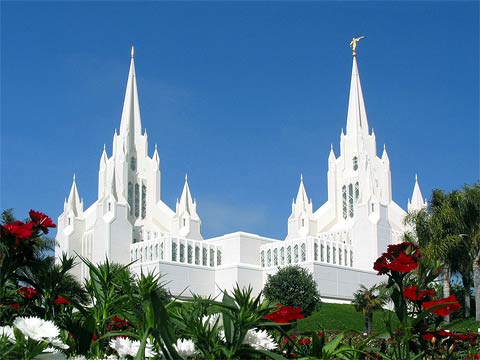 I have been following, with great fascination, the controversy over Mitt Romney’s prominent membership in the Church of Jesus Christ of Latter Day Saints, which is a really long-assed way of saying Mormons, which is what everybody else calls them and most of them call themselves. I am glad he made his speech, although I wasn’t so glad about the speech itself, which I think should have been more weirdness-forward. But I am happy the Mormons are getting a lot of press because, well, I like Mormons.

Partly this is because, as hardcore American conservative believers go, I have generally found Mormons to possess a lot of enjoyable qualities: a wry sense of humor, a lack of fundamentalist wrath, and a kind of friendly reserve I identify with the secret underwear and stuff. I wrote a long piece about the Mormons almost a decade ago, and spent a bunch of time in Salt Lake City, and had fun with everyone except the PR flacks of the Church, who treated me like, well, PR flacks. If I am on a plane and find that I am sitting next to a Mormon missionary (which has happened), I do not cringe: I look forward to the engagement, which usually involves me realizing how woefully ignorant these youngins are about the more peculiar fundaments of their own faith. If Mormons come to the door, I smile. Here we go!

I recognize that the Mormon church has a complex history, and like all churches, has and continues to do negative things, both to its own members and to other people, like gays. Because the Church hierarchy control access to the temples, for example, they are able to manipulate the rank and file in sometimes cult-like ways. And the issues of religion and politics are very complicated, and like a lot of essentially secular people, I am scared of major believers controlling nuclear missiles. But I don’t want the dark side of religion to obstruct my basic message: Mormons are cool. Here’s why:

The temples are totally great looking. Sometimes beautiful, sometimes spooky, sometimes resembling theme park exotica, Mormon temple architecture is like nothing else on the planet. Architecturally, the most powerful Mormon temples (San Diego, Washington DC (above), Mexico City, Portland) are some of the most amazing buildings around. I have never seen an interior (though they let Gentiles in for a month before the temple first opens) but I have seen some photos, and I respect the aggressive refusal to democratize sacred space, which creates an esoteric, intriguing, vaguely unsettling vibe that I enjoy, for the simple reason that it creates a space for real mysteries that remains partly visible to the rest of us. That’s why they are often on hillls, by freeways, etc.

Harold Bloom digs the Mormons. In his great book The American Religion, Harold Bloom plays favorites with the Mormons, and I am convinced by his reading. The story of the Mormons is the American religious story: Christianity but with a heretical, futuristic twist, at once Gnostic and embodied, a partly self-mythologized tale of rebirth and frontier exodus and promised land. As Bloom argues, religion is not just about belief; it is also about the religious imagination, and this Joseph Smith had in spades. Plus he was a rascal.

Joseph Smith was into esoterica. There are a couple of books out there—Brooke’s The Refiners Fire is the best—that shows how Joseph Smith emerged from the most interesting aspect of American religion in the 17th and 18th centureis: its repressed, largely forgotten, but incredibly vital tradition of esoteric, alchemical, mystical, and potentially revolutionary lore. (As a kid, Joseph Smith was known for his ability to find lost objects with a shewstone, or crystal ball.) The debt Mormons owe to Masonic ritual is just the start of the story. Mainstream Mormons don’t like this stuff, but its impossible to argue with.

Ex Mormons are fun. I have had the good fortune to have hung out and partied and occasionally made love with some ex-Mormons in my life, and, without getting into personal detail, I have to say that most share certain elements of personality and life view that, to my mind, says something positive about the religion and ethical strictures they have so thoroughly (and understandably) rejected. One of them even showed me the secret hand signs they teach you in the higher temple endowments. I forgot them. Doh!

Mormons do not hate polyamory. Yeah I know that the Church officially banished polygamy in order for Nevada to become a state, but there are lots of polygamists left, and as the great Big Love acknowledges, they are not all drooling, gun-toting survivalists in the hills. For all its problems, the old Mormon practice of plural marriage is an acknowledgment that the conventional form of Christian monogamy that continues to tyranize the imagination is not only not necessary – it’s not even sacred.

Baptizing the dead is absolutely astonishing. The Mormon belief that you can baptize people who are already dead is the most unusual aspect of their faith that is widely known (there is much more esoterica). This makes some people upset—a number of years ago, Jewish groups demanded that church members stop baptizing names they got from Holocaust rolls. But this just reflects ignorance of this astounding practice, which is mostly performed by Mormon kids processing names flashed on computer screens: the baptism is not compulsory, but gives the shade the option to convert from the convenience of the afterlife.

Mormons love genealogical data. Because of the baptism of the dead, the Mormons have been collecting genealogical information since the beginning, and their overall philosophy is pretty open source. Their own information helps millions of people researching their family trees—and make no mistake, genealogy is a very cool geek sport. Mormons have also had to think long and hard about databases in a manner that has made them very bully on tech. No neo-Luddites here.

There is no Mormon hell. Sick to death of fire-and-brimstone preaching, and the mean, hypocritical, harshly judgmental people so often attracted to fire-and-brimstone preaching? Mormons believe we all get to continue to struggle for spiritual advancement after death, which is why you can do proxy baptism of the dead in the first place. So the Mormon version of hell is kind of like the old Catholic purgatory. For mainline Christians, this dogma is deemed particularly heretical, but I think it makes even the most evangelical Mormons relatively pleasant and personable to talk to. They aren’t in so much of a damn hurry.

Mormons are Christian materialists. By materialists I don’t mean they like to buy lots of stuff and have big homes, though plenty do, because they are an industrious lot. But this outward success partly derives from their more theological materialism, which can be boiled down to the doctrine that God has a body. The hatred of the body evinced by a lot of Christians does not really have a purchase here. And they got the big families to prove it!

Mormons are very SciFi. Despite the mythomania of L. Ron Hubbard and the manias of UFO sects, the Mormons are the most cosmic of American religions. There have been Mormons in space, and Mormon firms have worked for NASA. Orson Scott Card, who has written some of the most importantly ethical pop SF books in the last few decades, is a fervent Mormon. And the San Diego temple looks like two x-wing fighters racing neck-and-neck. Why all this? Because we are all potential gods, and if we become gods after death, we get to run a planet, a real, honest-to-god material planet. From The Book of Abraham, which prophet Smith “translated” from some Egyptian funeral texts, we even know the name of the “star” near the Biblical God: Kolob, which devoted fans of SF TV will recognize as a close cousin to another important planet. Which leads us to…